The Reverend Dr. John A. Dalles 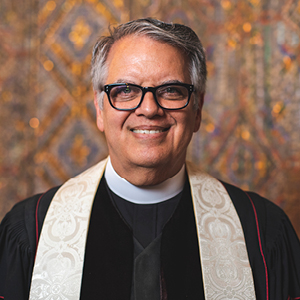 The Reverend Dr. John A. Dalles served as Interim Senior Pastor and Head of Staff at Shadyside Presbyterian Church for two years, from February 2019 through February 2021.

A teaching elder and minister of word and sacrament in the Presbyterian Church (U.S.A.), Dr. Dalles has more more than thirty-five years of experience in parish ministry. He earned degrees from the Pennsylvania State University (Bachelor of Science in Architecture), Lancaster Theological Seminary of the United Church of Christ (Master of Divinity), and Pittsburgh Theological Seminary, PC(USA) (Doctor of Ministry).

Ordained by Donegal Presbytery in August 1982, John is a lifelong Presbyterian who has lived in Pittsburgh, Coatesville, Lancaster, and State College, Pennsylvania; Petworth, England; San Diego, California; and South Bend, Indiana. While studying in Petworth, he sensed a call to ministry, but was employed in architecture prior to divinity studies.

Under his leadership, Wekiva Presbyterian Church engaged in a comprehensive time of renewal, including a $1.9 million vision initiative, and experienced growth in all areas of discipleship and church life. Dr. Dalles has chaired the Theology & Worship Committee of Presbytery, has served on the Committee on Ministry, and as Moderator of Central Florida Presbytery (2013). He was a 2004 commissioner to the PC(USA) General Assembly and is a 2005 recipient of a Clergy Renewal Grant from the Lilly Foundation, called “Spirit of God, Descend Upon My Heart” – an exploration of places associated with great hymn writers, which was undertaken in June and July of 2006.

At Fox Chapel Presbyterian Church, Dr. Dalles’ duties included worship leadership and preaching, spiritual growth, congregational life, pastoral care, adult education, and new member outreach. In May 1994, he was conferred the Doctor of Ministry by Pittsburgh Theological Seminary for research in pastoral leadership in the multi-staff church. He instituted Stephen Ministry and served the Presbytery’s Preparation for Ministry Committee while in Pittsburgh.

Author of numerous hymn texts, John’s “Come, O Spirit” and “God, Bless Your Church with Strength” are included in the 1990 Presbyterian Hymnal. His commissioned hymns include those for Presbyterian Heritage Sunday; Augsburg, Goshen, Maryville, Tusculum, Wilson and Knox (Toronto) Colleges; American University; Pittsburgh and Lancaster Seminaries; Peachtree Presbyterian Church; and the Lutheran World Federation. His works are catalogued at Oberlin College Library and represented by GIA Publications, Oxford University Press, and others. A life-member of the Hymn Society, John has published three collections of hymns: Swift Currents and Still Waters (2000), We Turn To God (2010), and God Is the Singer’s Friend (2013). His hymns have twice received first place in the highly-regarded Macalester Plymouth Annual Hymn Competition, in 2012 and in 2013.

John is married to the former Judith Ann Taylor, a South Bend native, registered nurse, and also a lifelong Presbyterian. They are the parents of two adult children, both of whom are married: son John is a Winter Park, Florida, police detective, and daughter Anne is a marketing director for a travel media company as well as an adjunct professor at the University of Central Florida, in Orlando.

Read entries from By God’s Side, the blog series Dr. Dalles wrote during his interim ministry with Shadyside Presbyterian Church.

Watch a brief video introducing a series of conversations with Dr. Dalles.