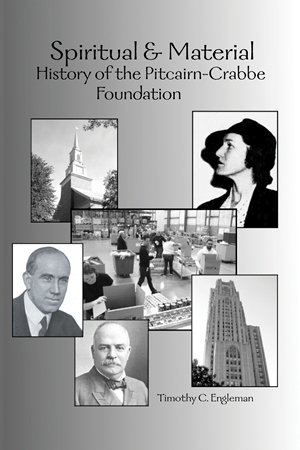 Quietly, for more than eight decades, the Pitcairn-Crabbe Foundation has made charitable grants in accordance with the will of Mrs. Susan Hunt. A low profile has served the foundation and its grantees well; however, it seemed worthwhile to the directors that the foundation be better known among Shadyside Presbyterian Church officers, staff, and members. The first comprehensive history of Pitcairn-Crabbe — written by Elder Tim Engleman — covers the origins, development, and work of the organization.

The Pitcairn-Crabbe Foundation is a corporation separate from Shadyside Presbyterian Church, yet its Board of Directors consists of the church’s Board of Trustees. Broadly, its purpose is to enhance the spiritual and material condition of people, mainly in Western Pennsylvania. Mrs. Hunt’s will outlined how this is to be carried out. She expressed hope that the foundation’s work would help perpetuate the memories of her grandparents, Robert and Elizabeth Pitcairn, and her mother, Susie Pitcairn Crabbe. Robert Pitcairn, a founding member of the church, was a railroad executive and entrepreneur. Mrs. Hunt designated much of the remainder of the Pitcairn fortune to launch the foundation in 1940.

The first chapter offers biographical sketches of those whose memories are to be perpetuated. The second chapter chronicles the poignant story of Susan Lee Hunt, whose short life, though rife with personal tragedies, culminated in the creation of the Pitcairn-Crabbe Foundation. Out of great wealth and great turmoil, she and her trusted advisers envisioned support for Christian education, religious and church work, community improvement, and relief of distress. The subsequent chapters show how the foundation realized that vision through years of societal change.

Copies of Spiritual and Material: History of the Pitcairn-Crabbe Foundation are available at no cost in the church Narthex beginning in September.