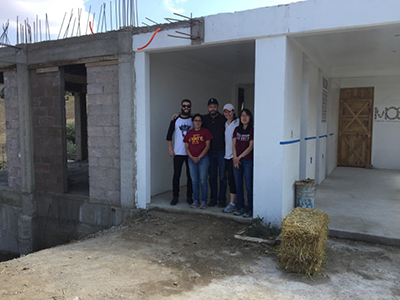 Today we visited the communities where ConeXión Mosaico has focused its ministries: Chimalhuacán, Las Palmas, and San Sebastián. It was so encouraging to see the immense progress in all of these places in just two years since we last visited. A previously rundown field in Chimalhuacán where crime was rampant is now a beautiful sports and recreation indoor/outdoor facility for the community. In Las Palmas, the water lines and water tank that were just being built and installed two years ago are now complete. The plans we saw before for a community center have begun construction. And youth in San Sebastián are asking and working for a library to be built in their neighborhood. 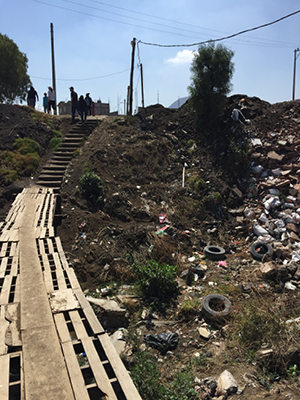 But the most significant moment for our team came when we visited the location of the project we worked on two years ago. At that time, community members wanted to clear a ravine of trash so that children could play in the grassy knoll and trees. It was – like this year – tedious and hard work, but the product was beautiful and deeply appreciated by the neighbors, who all joined in with the cleaning efforts. We learned that, after that, other areas of the neighborhood also decided to clean up their sections of the ravine to transform those areas into park spaces as well! However, soon thereafter, other neighbors rallied around, using these ravines as construction dumps, for which the neighborhood would get paid and could then sell the land to others for housing. When those who wanted to clear the space argued their position, they received threats against their safety and families. Consequently, the space we cleared two years ago has once again become a dumping ground for trash and construction fill. Seeing it and hearing these stories was both sad and good — sad because the efforts begun by the community and with which we aided are no longer happening. But it was a good reminder of two important things:

Today we are ever more grateful for the work ConeXión Mosaico is doing, and for our opportunity to partner with them in this important work. 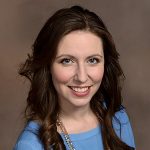