Worship at Shadyside Presbyterian Church offers spiritual refreshment in a traditional liturgical setting. Join us for an inspirational service as we gather to worship God through our prayers, songs, and demonstrated concerns for each other. 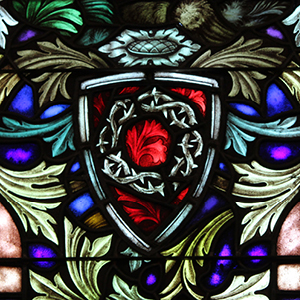 On Good Friday, April 14, our observance of Holy Week continues in an evening of music and readings at 7:00 p.m. in the Sanctuary.

Among the anthems offered by the Shadyside Chancel Choir with accompaniment by cellist Elisa Kohanski will be John Tavener’s Svyati. Musicologist Jeremy Grimshaw writes of the piece:

The text of John Tavener’s Svyati (Holy One) is in Church Slavonic, and it is used at almost every Russian Orthodox service, perhaps most poignantly after the congregation has kissed the body in an open coffin at an Orthodox funeral. The choir sings as the coffin is closed and borne out of the church, followed by the mourners with lighted candles. The cello represents the Priest or Ikon of Christ. As in Greek drama, choir and priest are in dialogue with each other.

Above a constant subterranean drone in the basses, sing lines of the Trisagion from the Orthodox liturgy: “O Holy God, Holy and Strong, Holy and Immortal, have mercy upon us.” This text is part of virtually every Russian Orthodox service. The Trisagion text is repeated three times, giving the work a trinitarian form — one that is punctuated by a unique figure given at the beginning of each of the three sections. The center section is particularly moving, as Tavener executes an astonishing sonic special effect: after the variation figure from the cello, all the vocal lines (save the low bass drone) begin an arching stepwise line in parallel octaves or unisons; only two out of eight voices finish it, however; the others remain “stuck” on different notes in the line. The work ends with a microcosm of itself. As the cello outlines three isolated iterations of the initial rising figure, each one ascending an octave, it is answered by an embracing cadence in the voices that sets the title word, “Svyati.”

Tavener’s work and other musical offerings will be interspersed with Scripture readings, hymns, prayers, and periods of silence to allow for individual contemplation. Please join us as we remember Jesus’ Passion on the cross for us and as we anticipate with hope His Resurrection.

If you cannot join us in person, we invite you to join us in worship through a live audio stream of our service. Listen to the live webcast here.

Photograph: Detail of the “Easter Morn” art glass window in the north transept of Shadyside Presbyterian Church, received as a gift in connection with the church’s fiftieth anniversary celebration and dedicated in honor of the founders of the church.  A gift of Mr. and Mrs. Wallace H. Rowe, the window was designed by the Gorham Company of New York, 1916.  Photograph taken by Ellen L. Allston.