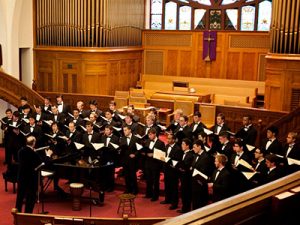 On Sunday, March 8, 2020, the Virginia Glee Club will join the Shadyside Chancel Choir during worship. The ensemble will offer an extended choral prelude from 10:45 to 11:00 a.m., and also will present a brief, free concert after worship. Enjoy light refreshments and fellowship in the Sharp Atrium at noon, then return to the Sanctuary for the concert from 12:30 to 1:00 p.m. Plan on arriving early for worship and staying a little longer afterward to hear these talented young singers.

About the Virginia Glee Club

Founded in 1871, the Virginia Glee Club is the oldest musical organization at the University of Virginia and one of the oldest all-male collegiate vocal ensembles in the United States. Throughout its history, the Club has been recognized consistently as a leader among American men’s choruses, performing a variety of sacred and secular music in the classical tradition. Currently directed by Grammy® Award-winning conductor Frank Albinder, the group has toured widely, both domestically and abroad, and also has been heard on broadcasts of NBC’s Today Show, National Public Radio’s Performance Today, Virginia Public Radio, and the Voice of America.