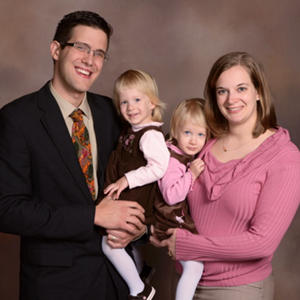 This Advent season looks a bit different in our family as we eagerly anticipate the birth of our third child, a son, this coming February. There is a lot to consider with the decision of what to name a child. In our case, our daughters both have rather traditional names that came from within our extended family. When choosing our son’s name, we have kept that in mind and are looking over our male relative’s names and deciding what will be the best fit. It is not an easy decision, and it is one the child will live with for the rest of his life!

In our Scripture passage, Zechariah and Elizabeth were in a similar scenario with their firstborn son. In Jewish tradition for that time, the baby would not be named until the eighth day upon his circumcision ceremony, and it was expected that a firstborn male would be named after his father. In an earlier passage, we learned that Zechariah had been visited by an angel proclaiming that he would be a father and the son would be named John. At the time, Zechariah doubted God’s gift to his family and was, as such, afflicted with dumbness. When it came time to name the child, the gathered priests and family assumed the baby would be named Zechariah, and were shocked when Elizabeth spoke out and said he was to be named John. This simply was not done in their culture, and when they turned to Zechariah for confirmation he wrote, “His name is John.” Immediately, God rewarded Zechariah for his faithfulness by restoring his speech, and he began shouting praises for God.

This laid the foundation for John the Baptist to become an outspoken preacher and right-hand man of Jesus. In the end, a name is just a name. It is a collection of letters strung together to identify a person. In this instance, John’s name was so much more, because it represented the faith of his parents in God’s will. It broke cultural norms and set John apart to be a chosen follower of Christ and leader of the early Christian Church.

Prayer: Lord, we are in awe of You and of the many miracles of this season. We ask that You would walk alongside us during our waiting, and that we would have the faith of Elizabeth and Zechariah. Prepare our hearts for the coming of Jesus, and give us voices to always shout Your praise.  Amen.

Read more Advent Reflections on the blog of the Shadyside Presbyterian Church website.

Artwork: Detail of No Between © Jan L. Richardson. janrichardson.com. Inspired by Isaiah 64:1: “O that You would tear open the heavens and come down … .”