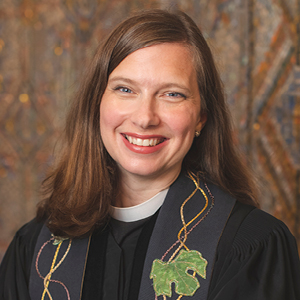 Previously, Rev. Shelley served for nine years as the Associate Minister of Christian Education at the Presbyterian Church of Chestnut Hill in Philadelphia, Pennsylvania, where she was ordained to the Ministry of Word and Sacrament in October 2012.

After earning her Bachelor of Arts degree in English literature and studio art from Columbia College in South Carolina, Austin received her Master of Divinity and Master of Theology degrees from Princeton Theological Seminary, where she currently continues her studies as a Ph.D. candidate in homiletics. Throughout her years of study at Princeton, she has continued her strong commitment to sacred music and the arts as a soprano and flautist with the seminary’s choir.

Prior to attending seminary, Austin began her journey toward a second career in professional ministry as the Director of Youth Ministries at Lake Murray Presbyterian Church in South Carolina. Her first career as a teacher of visual art, Spanish, Latin, and gifted students’ programming turned out to be pivotal in preparing her for her passions in ministry: children’s ministry, ministry in the public square, writing, teaching, and preaching.

In 2014, Austin joined the governing board of Young Clergy Women International, serving as managing editor of Fidelia, the organization’s online magazine, until her graduation from the group in 2019. Since that time, she has enjoyed writing poetry, sermons, and articles for various publications, including The Christian Century; Connections; and Preaching as Resistance: Voices of Hope, Justice, and Solidarity, edited by Phil Snider.

Austin is the oldest of ten siblings, born in rural South Carolina and raised by her mother and grandparents on a tiny family farm. At age 17, she left home for The South Carolina Governor’s School for Creative Writing, where she first met Mark, whom she would (much later) marry. Previously an elementary school principal, Mark presently serves as the Executive Director of Academics for the Environmental Charter School in Pittsburgh. He also makes perfect banana pudding and sweet tea.

Together Austin and Mark are kept young by parenting four vivacious children and caring for their pets: three mischievous cats and an adorable border collie puppy.