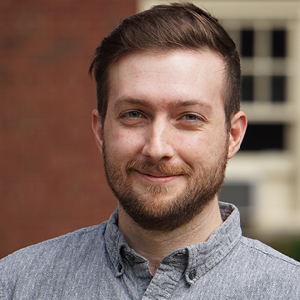 Wesley C. Smith served as Student Assistant Pastor at Shadyside Presbyterian Church from September 2020 to July 2022, beginning his tenure as a seminary intern during his second year of study at Pittsburgh Theological Seminary (PTS) and concluding just after his graduation. During his learning experience, Wes rotated through the different ministry areas of our church while working alongside the pastors and staff. In his second year at Shadyside, Wes took on an expanded role, working closely with young adults and youth, particularly focusing on preparing our confirmands for confirmation.

Born and raised in Michigan, Wes graduated from Saginaw Valley State University with a bachelor’s degree in graphic design. After college, he worked as a graphic designer and youth coordinator in Port Huron, Michigan, for five years. During his time in Port Huron, it became apparent that Wes was feeling a pull toward a more formal theological education. Upon discerning PTS would be the place to pursue his pastoral path, Wes and his wife, Jessica, packed up their two cats and began their time in Pittsburgh. In September 2021, they welcomed their first child, a daughter, to their family.

In May 2022, Wes earned his Master of Divinity from PTS, along with several honors. He was awarded the Paul T. Gerrard Prize in Homiletics and Pastoral Care, as well as the William B. Watson Prize in Hebrew.

The Smiths relocated to Kalamazoo, Michigan, in July 2022, when Wes accepted the invitation to serve as a resident hospital chaplain at Bronson Methodist Hospital in Kalamazoo.