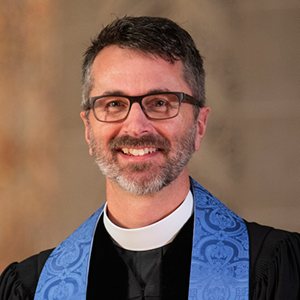 The Reverend Todd E. Leach served Shadyside Presbyterian Church as Associate Pastor for Missions from January 2008 through August 2021, when he was called to serve as the Senior Pastor at Westminster Presbyterian Church in Buffalo, New York. During his tenure at Shadyside, Todd received support from the church’s Howard C. Scharfe Fellowship Endowment as he pursued a Doctor of Ministry in Public Theology at Drew Theological School. He completed his coursework in the summer of 2021 and earned his degree in August 2021.

Previously, Rev. Leach was Director of Mission and Deacon Ministries at Media Presbyterian Church (MPC) in suburban Philadelphia. During his four years of service at MPC, he led numerous urban, national and international mission trips. Todd also was the Executive Director of a faith-based, non-profit housing ministry, which was started by MPC.

Raised in Jackson, Ohio, Todd graduated from Ohio University in 1993 with an education degree. After an independent study in the Pittsburgh Public Schools, he felt called to teach in an urban setting. He moved to Columbus, Ohio, and taught middle school for eight years. Todd continues to be surprised by phone calls and emails from former students.

In 2001, Todd made the difficult decision to leave teaching because he felt God calling him to full-time ministry. He moved to Philadelphia to attend Eastern Seminary. When asked why he chose Eastern, he stated, “Having an interest in international missions, I was drawn to the diversity on campus. The student population was fifty-percent African American, with over twenty countries represented. I was introduced to the world through my theological studies at Eastern. The conversations in the halls rivaled the conversations in the classroom.” While at Eastern, Todd served as Student Chaplain and senior class president, represented Eastern in the Inter-Seminary Seminar, and received the Wilbur T. Elmore Church History Award.

His wife Linda grew up in Pitman, New Jersey, just outside of Philadelphia. She received her associate’s degree in ophthalmic science from Camden County College and continued her studies at the University of Pennsylvania, obtaining a degree in ophthalmic medical technology and surgical technology. She has worked with Bausch and Lomb Surgical and Pharmaceutical since 1997. During the ten years she lived in Media, Pennsylvania, Linda provided three years of service as an Elder.

Todd and Linda were married in April 2006. They welcomed daughter Nadia Jean into the world in May 2007 and welcomed Vinodhini Grace into their family in August 2009. Although their favorite hobby includes playing with Nadia and Dhini, they also enjoy outdoor activities and barbecuing with friends. While Todd misses coaching, he enjoys participation in athletics whenever time allows.

About his leadership style, Todd writes, “I describe myself as a servant leader who leads with courageous humility. I embrace the shared leadership modeled in PC(USA) polity and recognize the truth of the priesthood of believers. I am a team member who recognizes my role sometimes includes making difficult decisions with confidence. As a leader I invite others to walk beside me toward Christ and in so doing, I walk beside them in their faith journey. I recognize that there are times when I walk in front of those I lead, but there are times when I must walk beside and behind them as well. As a leader I feel that it is important to rejoice with those rejoicing and to weep with those weeping (Romans 12:15). Being committed to people is imperative to being a relational pastor.”

Read the announcement of Todd’s departure from the staff of Shadyside Presbyterian Church.