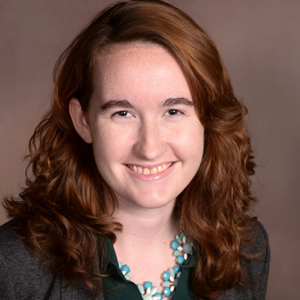 A 2021 graduate of Pittsburgh Theological Seminary (PTS), Rebecca Young is a staff chaplain at Grant Medical Center in Columbus, Ohio.

In May 2021, Rebecca graduated from Pittsburgh Theological Seminary (PTS) with a Master of Divinity degree. During her time at PTS, she served as the student body president and worked as a researcher for the World Mission Initiative. Rebecca then completed a chaplain residency at the University of Arkansas for Medical Sciences in Little Rock, where she served as a chaplain for the neo-natal intensive care unit and level-one trauma emergency department. In February 2022, Rebecca accepted a permanent call to serve as a staff chaplain at Grant Medical Center in Columbus, Ohio.

A member of our church family since 2013, Rebecca began attending worship at SPC after moving to Pittsburgh for graduate school in the summer of 2012. Rebecca was ordained as a ruling elder at Westminster Presbyterian Church in Xenia, Ohio, and served as a ruling elder with Shadyside’s Session for four years. During that time, she served on the Adult Christian Education Committee, as well as the Budget and Finance Committee. In addition, Rebecca also served on the leadership team of SPC’s Young Adult and Graduate Student Ministry and has enjoyed working with the church’s youth and our local and international mission partners.

With a background in journalism and international development, Rebecca has worked in various countries in North Africa and Europe. She has volunteered as a high school soccer coach and with the Humane Animal Rescue.