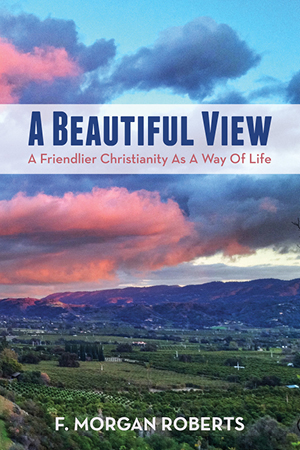 Many Shadysiders remember gratefully sermons of the Reverend Dr. F. Morgan Roberts, Pastor Emeritus, who served as Shadyside’s Senior Pastor from 1985 to 1994 and used his ample storytelling skill in his preaching. His latest book originated as a guide for a men’s discussion group on Christian beliefs. A Beautiful View: A Friendlier Christianity as a Way of Life is a gem of a “little” book through which Dr. Roberts examines modern Christian living in a succinct, yet thorough, text.

While written to guide discussion, the book stands on its own for an individual reader. With the author’s graceful and economic style, the twelve topical chapters make daily, devotional-type reading convenient. However, this reader found the content captivating and finished the book in two pleasant sittings. Dr. Roberts guides the text in a way that is, at once, gentle and thought provoking.

The church received a generous donation to purchase books which will be used, in part, to make twenty copies of A Beautiful View available, at no cost, to interested readers. The books may be picked up on Sunday, November 18, during fellowship in the Parish Hall following worship.

Those who receive the book will know that it cries out to be shared with Christians and with those who are curious about the faith. With Christmas in view, many will want to consider purchasing A Beautiful View for friends and family who may fall into either group.

F. Morgan Roberts is Pastor Emeritus of Shadyside Presbyterian Church, where he served as pastor from 1985 until his retirement in May of 1994. A widely known preacher, Dr. Roberts has served churches in New York, Kentucky, Michigan, Pennsylvania, Ohio, and Alabama. He is the author of Are There Horses in Heaven? and Other Thoughts (1996). In addition, he has co-authored two books with John M. Mulder 28 Hymns to Sing Before You Die (2014) and 28 Carols to Sing at Christmas (2015). A member of the Society of Biblical Literature, he has contributed essays to several multi-volume scholarly works.